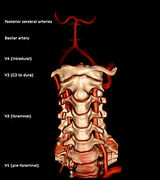 Description:
The vertebral arteries are major arteries of the neck. They branch from the subclavian arteries and merge to form the single midline basilar artery in a complex called the vertebrobasilar system, which supplies blood to the posterior part of the circle of Willis and thus significant portions of the brain.

The vertebral arteries arise from the subclavian arteries, one on each side of the body, then enter deep to the transverse process of the level of the 6th cervical vertebrae (C6). Or occasionally (in 7.5% of cases) at the level of C7. They then proceed superiorly, in the transverse foramen (foramen transversarium) of each cervical vertebra until C1. This path is largely parallel to, but distinct from, the route of the carotid artery ascending through the neck. At the C1 level the vertebral arteries travel across the posterior arch of the atlas through the suboccipital triangle before entering the foramen magnum.

Inside the skull, the two vertebral arteries join up to form the basilar artery at the base of the medulla oblongata. The basilar artery is the main blood supply to the brainstem and connects to the Circle of Willis to potentially supply the rest of the brain if there is compromise to one of the carotids. At each cervical level, the vertebral artery sends branches to the surrounding musculature via anterior spinal arteries.