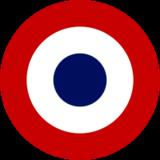 After the defeat of France, Marshal Henri-Philippe Pétain was forced to sign the armistice with Germany on 22 June 1940. This was however not the end for the French Air Force. The branch was soon split into two camps: those who escaped from France and joined the Free French Forces (Forces Françaises Libres) and those who stayed and flew for the French Armistice Air Force on behalf of the Vichy government. Initially the Germans wanted to disband the air force completely, and all personnel were to be demobilized by mid-September. However, on 3 July 1940 the British Royal Navy attacked the French fleet anchored in the Algerian ports of Oran and Mers-el-Kebir. Angered, the French broke all connections with the British. The Germans now agreed to the forming of a Vichy French air force.

In a parallel of what had happened to Germany after World War I, the French government, now with its seat moved to Vichy, was forced by the Germans to accept its terms for a reduced army and navy, both of which would be only strong enough to maintain order in France and in its colonies.France was allowed to keep her colonies, whereas Germany had been forced to cede all of hers under the terms of the Treaty of Versailles signed in June 1919. Germany ordered that...
Read More