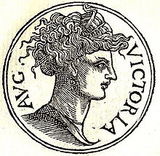 Description:
Victoria, also known as Vitruvia, was a leader in the roman breakaway realm Gallic Empire in the late 3rd century. She was the mother of Victorinus, who ruled as Gallic Emperor until his assassination in 271. Afterwards, Victoria used her authority to stabilize the empire and select a successor.

Victoria is mentioned in Aurelius Victor's Liber de Caesaribus, and in the account of the Thirty Tyrants in the unreliable Historia Augusta. Nothing is known of her early life, though she must have been from a wealthy and distinguished Gallic family, which produced the emperor Victorinus, her son.Liber de Caesaribus 33.12. See Bird, p. 34; 141. According to Aurelius Victor, after Victorinus was killed in a mutiny, Victoria stepped in, using her copious resources to buy the support of the legions. Thus she assured the ascension of her chosen candidate for emperor, Tetricus I, formerly the governor of Gallia Aquitania. The Historia Augusta, which counts her as one of Rome's "Thirty Tyrants", adds additional details, claiming that Victoria initially made Victorinus' otherwise unattested son, Victorinus Junior, emperor, but that he too was soon killed. The Historia also says that she herself bore the titles Mater Castrorum ("Mother of the Camp") and Augusta and minted her own coins, but that she died shortly after Tetricus' ascension either by murder or natural...
Read More