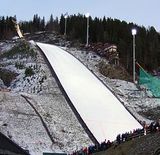 The hill was built in 1936 and was rebuilt to a ski flying hill in 1966, when Bjørn Wirkola set a new world record, jumping 146 meters. The hill has been rebuilt and renovated many times, the last time before the 2000 Ski-flying World Championships. The hill is owned by "Stiftelsen Vikersund Hoppsenter", a foundation created by Vikersund IF.

The hill has been rebuilt for the 2012 Skiflying World Championships. It is the first in the world with a hill size of 225 meters, making Vikersundbakken the largest skiflying hill in the world, as Slovenia's Planica, which was the largest as of 2010, is HS215. It has been built further in to the terrain with sidewalls made of natural gravel to avoid wind problems during competitions. Furthermore, it has been slanted slightly to the south from the in-run area to further reduce wind problems. The hill was ready for the 2011 Trial Skiflying World Championships held on the 11-13th of February 2011.

The old in-run was demolished in 2010. Architects...
Read More