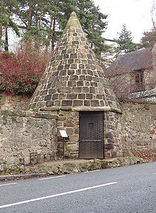 Description:
Village lock-ups are historic buildings that were used for the temporary detention of people in rural parts of England and Wales. They were often used for the confinement of drunks who were usually released the next day or to hold people being brought before the local magistrate. A typical village lock-up is a small structure with a single door and a narrow slit window or opening. Most lock-ups feature a dome or spire shaped roof and are commonly built from brick, large stones or timber. The village lock-up can either be round or polygonal in plan and minor variations in design, materials and appearance do occur although they were all built to perform the same function. Village lock-ups have acquired a range of local nicknames including blind-house, bone-house, bridewell, cage, jug, kitty, lobby, guard-house, round-house, tower and watch-house.

Rise of the village lock-up

The majority of surviving village lock-ups date from the 18th and 19th centuries when rural communities struggled to police thefts, burglaries, shootings, drunkenness, the obstruction of watchmen and the stealing of livestock. During this period a number of lock-ups were built as a place of detention for local rogues and miscreants until they could be removed to a town. Over time they became synonymous with drunkenness and many references to this coupling can be found in famous works of literature, including Barnaby Rudge by Charles Dickens, and The Water Babies by Charles Kingsley which contains the...
Read More