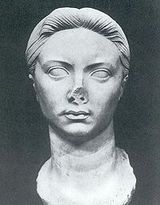 Not to be confused with Agrippina the Elder, Agrippa's daughter by Julia the Elder.

Vipsania Agrippina (36 BC-20 AD) was the daughter of Marcus Vipsanius Agrippa from his first wife Pomponia Caecilia Attica, granddaughter of Cicero's friend and knight Titus Pomponius Atticus. Her maternal grandmother was a descendant of Marcus Licinius Crassus. By marriage, she was a great-niece to Quintus Tullius Cicero.

Octavian and her father betrothed her to Tiberius before her first birthday. In 20 BC or 16 BC she married Tiberius. Their son Drusus the Younger was born in 13 BC.

Agrippa died in March, 12 BC. He was married to Julia the Elder, daughter of Augustus. Augustus forced Tiberius to divorce Vipsania and marry Julia. Tiberius reportedly loved Vipsania and disapproved of Julia. Vipsania was at the time pregnant, and from the shock lost the baby.

Tiberius divorced her against his will in 11 BC (non sine magno angore animi, Suetonius Vita Tiberii 7), and never ceased to rue his action. On one occasion Tiberius caught sight of Vipsania and followed her with an intent and tearful gaze (Suetonius, ibid.). Precautions were taken to avoid further embarrassing meetings with her.

In 11 BC she married Gaius Asinius Gallus Saloninus, a Senator and son of the famous orator Gaius Asinius Pollio. They had at least six sons. Vipsania Agrippina died in AD 20, a few days after the ovation of her son Drusus, which...
Read More