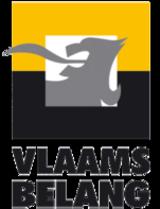 Description:
Vlaams Belang (, VB) is a Belgian far-right political party in the Flemish Region and Brussels that advocates the independence of Flanders and strict limits on immigration, whereby immigrants would be obliged to adopt Flemish culture and language. The party rejects multiculturalism, but accepts a multiethnic society as long as people of non-Flemish backgrounds assimilate into Flemish culture.

Vlaams Belang is the current name given to the historical Vlaams Blok, which adopted this new name and changed some controversial parts of its statute after a trial in 2004 condemned the party for racism. It has since sought to change its image from a radical to a more conservative party, and has distanced itself from some of its former programs. Most other parties have continued the cordon sanitaire which was originally agreed on against the former party, effectively blocking the Vlaams Belang from any executive power, and attempts on cutting public subsidies specifically for the party were made through the Belgian draining law.