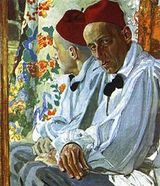 Description:
Vsevolod Emilevich Meyerhold (; born ) (2&nbsp;February 1940) was a great Russian and Soviet theatre director, actor and theatrical producer. His provocative experiments dealing with physical being and symbolism in an unconventional theatre setting made him one of the seminal forces in modern international theatre.

Vsevolod Meyerhold was born Karl Kasimir Theodor Meyerhold in Penza on 28 January o.s. (9 February n.s.) 1874 into the family of a Russian-German wine manufacturer Emil Meyerhold. Though he was by no means from a poor family, he was the last of many children.

After completing school in 1895, Meyerhold studied law at Moscow University but never completed his degree. On his 21st birthday, he converted from Lutheranism to Orthodox Christianity and accepted "Vsevolod" as an Orthodox Christian name (after the Russian writer Vsevolod Garshin, whose prose Meyerhold loved).

Meyerhold began acting in 1896 as a student of the Moscow Philharmonic Dramatic School under the guidance of Vladimir Nemirovich-Danchenko, co-founder of the Moscow Art Theatre. At the MAT, Meyerhold played 18 roles, such as Vasiliy Shuiskiy in Tsar Fyodor Ioannovich and Ivan the Terrible in The Death of Ivan the Terrible (both by Aleksey Tolstoy), and Treplev in Chekhov's The Seagull.

After leaving the MAT in 1902, Meyerhold participated in a number of theatrical projects, as both a director and actor. Each project was an arena for experiment and creation of new...
Read More