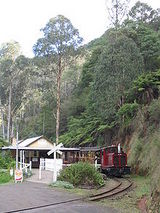 Description:
The Walhalla Goldfields Railway is a gauge (narrow gauge) tourist railway located in the Thomson River and Stringers Creek valleys in Gippsland, Victoria, Australia, near the former gold-mining town and tourist destination of Walhalla.

The Walhalla line was the last of four experimental narrow gauge lines of the Victorian Railways, the Moe-Walhalla railway commenced in 1904, but was not completed until 1910. The railway was expected to be a boon for Walhalla, which was in a state of decline with gold mining operations becoming uneconomical. The largest gold mining company closed in 1914.

After the closure of the Walhalla mines, substantial timber traffic was carried from sawmills around Erica until the late 1940s. Freight and passenger traffic declined, with the railway closed in sections from 1944 with the final section from Moe to Erica closed on June 25, 1954. The tracks and buildings were removed by 1960, leaving only the roadbed and a number of bridges.

The former station building at Walhalla was re-located to the Melbourne suburban station of Hartwell. The centre span of the National Estate listed Thomson River Railway Bridge was formerly part of a road bridge over the Murray River at Tocumwal (NSW).

Recognising the outstanding potential of the railway, several attempts to reopen the line for tourist traffic proved unsuccessful, until the early 1990s. The Walhalla Railway Taskforce formed in 1991, become the Walhalla...
Read More