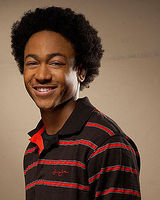 Description:
Wallace Fennel is a fictional character on UPN/The CW television series Veronica Mars, which debuted during the fall 2004 season on UPN. He is portrayed by Percy Daggs III.

Wallace has become Veronica's best friend; they first met when Veronica cut him down from the Neptune High flagpole after he was duct-taped to it by Eli "Weevil" Navarro. Deciding that Veronica was a better friend than any of the 09ers or jocks at Neptune High who simply laughed while he was taped to the flagpole, he began sitting with her at lunch. The two became fast friends when Veronica helped get him out of trouble with the PCH biker gang.

Wallace is 19, a Sagittarius and his hometown is Chicago, Illinois. He lives with his single mother, Alicia, and his brother. After befriending Veronica, he starts helping her in many cases. Because he is an office aide at Neptune High, Veronica often asks for "favors" in order to see school records and gain information on other students. He also gives her tardy slips and occasionally provides bits of key knowledge which helped Veronica in her investigations. When not working as her liaison into the school files, he is most often seen driving the getaway car (literally), providing distractions so Veronica could sneak around unseen, or planting bugged items around Neptune.

He is, arguably, the best basketball player on the Neptune Pirates basketball team. This becomes the focal...
Read More