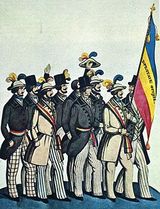 Description:
The Wallachian Revolution of 1848 was a Romanian liberal and Romantic nationalist uprising in the Principality of Wallachia. Part of the Revolutions of 1848, and closely connected with the unsuccessful revolt in the Principality of Moldavia, it sought to overturn the administration imposed by Imperial Russian authorities under the Regulamentul Organic regime, and, through many of its leaders, demanded the abolition of boyar privilege. Led by a group of young intellectuals and officers in the Wallachian Militia, the movement succeeded in toppling the ruling Prince Gheorghe Bibescu, whom it replaced with a Provisional Government and a Regency, and in passing a series of major progressive reforms, first announced in the Proclamation of Islaz.

Despite its rapid gains and popular backing, the new administration was marked by conflicts between the radical wing and more conservative forces, especially over the issue of land reform. Two successive abortive coups were able to weaken the Government, and its international status was always contested by Russia. After managing to rally a degree of sympathy from Ottoman political leaders, the Revolution was ultimately isolated by the intervention of Russian diplomats, and ultimately repressed by a common intervention of Ottoman and Russian armies, without any significant form of armed resistance. Nevertheless, over the following decade, the completion of its goals was made possible by the international context, and former revolutionaries...
Read More