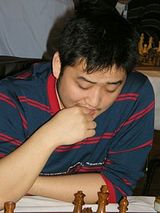 In October 2007, Wang became the first Chinese player and third Asian player to cross the 2700 Elo rating mark. In October 2008, he became the World No. 11, the highest ranking a Chinese player has ever achieved, surpassing the previous record of 17th by Ye Jiangchuan set in 2000. He has since surpassed this with a current world ranking of 9 in the January 2010 FIDE rankings, becoming the first Chinese world top-ten player.

Wang is currently ranked 4th in Asia and 2nd in China. In the FIDE Grand Prix, he was a last round victory over Teimour Radjabov away from joining Levon Aronian as an automatic qualifier for the Candidates Tournament of the World Chess Championship 2012 cycle; however, Radjabov secured a draw which allowed him to win the final qualifying position.

Wang Yue was to play on 1st Board at the World Team Chess Championship in January 2010, until China dropped out of the event at the last minute.

Wang Yue was born in Taiyuan, Shanxi Province, where he learned to play chess at the age of four. He would during summer every day after dinner...
Read More