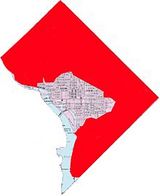 In an 1846 act, Congress returned the Virginia portions of the District to Virginia, leaving Washington County as the sole county in the District of Columbia.

The county was farmland and large country estates owned by wealthy farmers and statesmen. These estates included Pleasant Plains, the estate of the Holmead family; Edgewood, home of Treasury Secretary Salmon P. Chase; and Petworth, the estate of Col. John Tayloe. Also established in Washington County was the U.S. Soldiers' Retirement Home, where Abraham Lincoln lived during his summers as President. Despite its size, the population of Washington County was small.

Washington County was governed by a group of Justices of the Peace, who met on a Levy Court council. They performed the duties of county commissioners, and were subject to the Maryland state laws governing county commissioners, even though the county was outside the "state of Maryland". The President appointed the justices, and had the discretion to determine the number of...
Read More