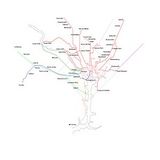 Description:
Streetcars and interurbans operated in the Maryland suburbs of Washington, D.C., between 1890 and 1962. Lines in Maryland were established as separate legal entities, but eventually they were all owned or leased by DC Transit. Unlike the Virginia lines the Washington and Maryland lines were scheduled as a single system. Most of the streetcars were built with grand plans in mind, but none succeeded financially. A combination of the rise of the automobile, various economic downturns and bustitution eventually spelled the end of streetcars in southern Maryland.

Remnants of the line

Opened on June 10, 1891 and connected Glen Echo with the Tennallytown...
Read More