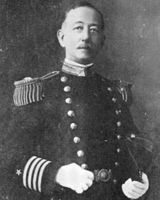 Description:
Captain Washington Irving Chambers, USN (1856–1934) was a United States Navy officer who played a major role in the early development of Naval aviation, serving as the first officer to have oversight of the Navy's aviation program.

Chambers was born in Kingsport, New York in 1856 and graduated from the United States Naval Academy in 1876. He served in various sea and shore billets from that time onwards, including on the celebrated Greely Relief Expedition under Winfield Scott Schley. In 1907-09, he was Assistant Chief of the Bureau of Ordnance. Later on, he was placed in charge of the development of aviation in the Bureau of Navigation. Among his other accomplishments, Captain Chambers arranged for the first take-off and landing of an airplane on a ship, pioneered work on torpedoes, and submitted one of the first American designs for an all-big-gun battleship.

Chambers Field in Norfolk, Virginia, dedicated in June 1938, was named in his honor, as is a U.S. Navy vessel under construction as of March 2010.

Many of his papers are held by the U.S. Library of Congress.