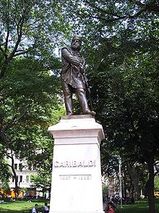 Description:
Washington Square Park is one of the best-known of New York City's 1,900 public parks. At 9.75 acres (39,500&nbsp;m<sup>2</sup>), it is a landmark in the Manhattan neighborhood of Greenwich Village, as well as a meeting place and center for cultural activity. It is operated by the New York City Department of Parks and Recreation.

An open space with a tradition of nonconformity, the park's fountain area has long been one of the city's popular spots for residents and tourists. Most of the buildings surrounding the park now belong to New York University, but many have at one time served as homes and studios for artists. Some of the buildings have been built by NYU, others have been converted from their former uses into academic and residential buildings. Although NYU considers the park to be the quad of the school's campus, Washington Square remains a public park.

While the Park contains many flower beds and trees, little of the park is used for plantings due to the paving. The two prominent features are Washington's Arch and a large fountain. It includes...
Read More