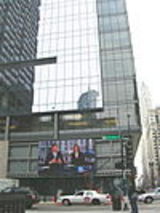 Description:
WBBM-TV, virtual channel 2 (digital channel 12), is the CBS owned-and-operated television station in Chicago, Illinois. WBBM-TV's main studios and offices are located in The Loop section of Chicago, as part of the development at Block 37, and its transmitter is atop the Willis Tower.

On September 6, 1946, the station received a commercial license as WBKB (meaning Balaban and Katz Broadcasting) on channel 4, the first commercial station outside the Eastern Time Zone, airing some of the earliest CBS programing, including...
Read More