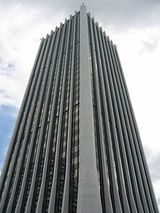 Description:
Wells Fargo Center is an office building located in Portland, Oregon, United States. The tower rises 546&nbsp;feet (166.4&nbsp;m) with 40 floors of office space and three levels of parking below the surface. When the structure was completed in 1972, the center became the tallest building in the State of Oregon.

The building and a connected five-story building were designed by Charles Luckman and Associates. Originally named the First National Bank Tower, the building opened on April 17, 1972,The Oregonian, April 18, 1972; Section 3 (Business), p. 7. The name was changed to the First Interstate Tower in 1981, after First National Bank of Oregon was acquired by First Interstate Bancorp. The current name was adopted after Wells Fargo purchased First Interstate in 1996. Upon opening in 1972, the Wells Fargo Center dwarfed all other existing high-rise developments in downtown Portland. Public outcry over the tower's scale and the potential of new development to block views of Mount Hood led to height restrictions on all new development.