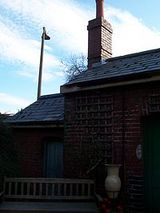 Description:
Wells-next-the-Sea railway station served the small seaside port of Wells-next-the-Sea in North Norfolk, England. It was opened in 1857 by the Wells & Fakenham Railway, later part of the Great Eastern Railway's Wymondham to Wells branch, and became a junction in 1866 with the arrival of the West Norfolk Junction Railway. It closed in 1964.

Wells was first linked with the railway in 1857 when the Wells & Fakenham Railway opened a line to , largely driven by the efforts of Lord Leicester and the directors of the railway company. They hoped that the railway, to be worked by the Eastern Counties Railway, would help reverse the declining fortunes of the town, whose inability to take ships of increasing size saw it overtaken by other ports. The decline continued notwithstanding the construction of a short branch line to Wells Harbour in 1860. In 1862, the Wells & Fakenham Railway became part of the Great Eastern Railway, a move which brought greater importance to the Wells line by providing a north-south connection with London's increasing food markets.

The West Norfolk Junction Railway was the next to come to Wells, in August 1866. The line came from on a 18½ mile single track aimed at exploiting the great arc of coastline between Hunstanton and Yarmouth. This line entered Wells on a sharp curve, turning through a full 180 degrees before converging with the Wells & Fakenham branch...
Read More