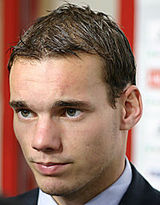 Description:
Wesley Sneijder (; born 9 June 1984) is a Dutch footballer playing as an attacking midfielder for Italian club Internazionale since 2009. He was named UEFA midfielder of the season as well as one of the three best midfielders in the world for 2010 by FIFA.

Due to his impeccable placement and confirmed ability to score from free kicks, Sneijder earned the reputation as a dead-ball specialist. With short stature, he is quick, strong on the ball, and his passing range is enhanced by his ambidexterity.

A product of the Ajax Academy, he previously played for AFC Ajax with whom he won six trophies and during which time he was awarded the Johan Cruijff Award (for best young player in Holland) in 2004. He was later sold to Real Madrid for €27&nbsp;million in 2007, winning La Liga in his first season with the club and later being sold to Internazionale for €15&nbsp;million.

Sneijder previously represented various Youth squads for the Netherlands. He is now a regular player for the Dutch national team, having made his debut in April 2003 at the age of 18, and having represented his country at the world cup in 2006 and 2010 as well as UEFA Euro 2004 & 2008. Individually he was awarded the 2010 Bronze Boot, the 2010 Silver Ball and included in the team of the tournament for UEFA Euro 2008 and the 2010 FIFA World Cup as well as named man of the match for six out of eleven games played by "Oranje"...
Read More