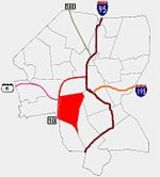 Description:
The West End is a neighborhood in the southwestern part of Providence, Rhode Island in the region often referred to as the South Side. Its boundaries are delineated by Westminster Street to the north, Huntington Avenue to the south, Elmwood Avenue to the east and the railroad tracks with Route 10 to the west. Cranston Street runs through the center of West End, past the Cranston Street Armory which has given the neighborhood the alternative name of the "Armory District."

The first settlement of the area took place shortly after King Phillip's War in the form of farming. In 1739, Obidiah Brown built the Hoyle Tavern at the intersections of Westminster and Cranston Streets, near present-day Classical High School. Early settlers built houses nearby to the tavern. In the 19th century, the area developed industrially and residentially with several factories built near the now-filled Long Pond. Residential construction followed after a horse drawn coach started serving the area in 1855 and a streetcar in 1865.

North of Cranston Street developed a white middle-class Yankee neighborhood of one and two family houses, while south of it, double and triple decker houses were built to accommodate increasing numbers of Irish, French Canadians, and blacks.