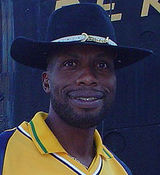 Description:
The West Indian cricket team played 16 first-class cricket matches in England in 1988, under the captaincy of Viv Richards. The West Indies enjoyed tremendous success during the tour, while England endured a "disastrous summer" of continuous change.

England easily won the initial three-match One Day International (ODI) series, retaining the Texaco Trophy and raising expectations for a successful summer in the five-match Test series to follow. However, the West Indies comfortably retained the Wisden Trophy by winning the Test series 4&ndash;0. This tour has become known in cricketing circles as the "summer of four captains" as England used four different captains in the five Test matches.

By the summer of 1988, the West Indies had experienced nearly ten years as the best Test team in world cricket, including a streak of winning 10 of 11 Test series they played from 1980 to 1985–86 (the other was drawn). However, the West Indies side that had enjoyed this considerable recent success was beginning to show signs of ageing. The experienced batsmen Viv Richards (the captain), Gordon Greenidge, Jeff Dujon, and Desmond Haynes were all coming to the end of their careers, and bowlers Michael Holding and Joel Garner had recently retired. As a result, the squad arrived with an unusually inexperienced group of pace bowlers. Supporting Malcolm Marshall, a veteran of...
Read More