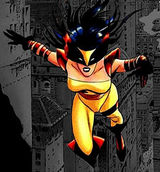 Description:
Wild Thing (Rina Logan) is a fictional character from Marvel Comics, who exists in the MC2 universe, an alternate future to the Marvel Universe. She is the daughter of the X-Men's Wolverine and the rogue mercenary Elektra. She first appeared in J2 #5 and was created by Tom DeFalco and Ron Lim.

An unrelated character named Wild Thing , who fought crime in a future virtual reality world, had her own brief series under the Marvel UK imprint in 1993.

Wild Thing first appeared in Marvel Comics' "MC2" line of spin-offs (specifically, in J2 #5). She soon gained her own (short-lived) series. The run enjoyed some acclaim, but due to low sales, the title was cancelled after issue #5. As of yet, only the Spider-Girl series managed to continue; although it concluded with issue #100, it was relaunched in October 2006.

Rina was the new girl at a high school, where some of the more popular girls tried to make her life miserable, describing her as the daughter of an immigrant and an unemployed biker. However, when her father Logan (Wolverine) picked her up from school on his bike, opinions changed about her, and especially when they learned that her mother Elektra was a wealthy martial arts expert. However, life at high school is not just about dealing with the in-crowd. As Wild...
Read More