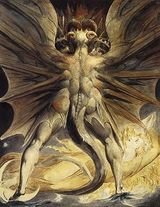 Description:
William Blake's body of work has influenced countless writers, poets and painters, and his legacy is often apparent in modern popular culture.Blake, Modernity and Popular Culture, Steve Clark and Jason Whittaker,(eds), Palgrave, 2007, Introduction: Blake, Modernity and Popular Culture; S. Clark & J. Whittaker His artistic endeavours, which included songwriting in addition to writing, etching and painting, often espoused a sexual and imaginative freedom that has made him a uniquely influential figure, especially since the 1960s. Far more than any other canonical writer, his songs have been set and adapted by popular musicians including U2, Jah Wobble, Tangerine Dream, Bruce Dickinson and Ulver. Folk musicians, such as M. Ward, have adapted or incorporated portions of his work in their music, and figures such as Bob Dylan,William Blake, in The Bob Dylan Encyclopedia, by Michael Gray. Alasdair Gray and Allen Ginsberg have been influenced by him. The genre of the graphic novel traces its origins to Blake's etched songs and Prophetic Books, as does the genre of fantasy art.

Blake's illustrated books were much imitated in the early twentieth century, and the emergence of radical ideas about alternative futures heightened the appeal of Blake's prophetic literature. Aldous Huxley took up the idea of The Doors of Perception, in a 1954 book of the same name about mind...
Read More