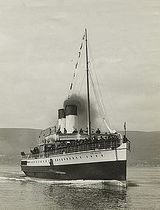 Description:
William Denny and Brothers Limited, and often referred to simply as Denny, were a Scottish shipbuilding company.

The Company was founded by Peter Denny in 1840 and based in Dumbarton, on the River Clyde. Although the Denny yard was situated near the junction of the River Clyde and the River Leven, the yard was on the Leven. The founder developed the company's interests in ship owning and operation with interests in the British & Burmese Steam Navigation Company, the Irrawaddy Flotilla Company and La Platense Flotilla.

The Company built all types of ships but were particularly well known as producers of fine cross-channel steamships and ferries. It was a pioneer in the development of the ship's stabiliser in conjunction with Edinburgh-based Brown Brothers & Company. In 1913 the Channel steamer Paris was one of the first ships to use geared turbine engines utilising new Michell tilting-pad fluid bearing. It also undertook experimental work in hovercraft and helicopter-type aircraft.

A subsidiary company, Denny & Company, also based in Dumbarton, manufactured a wide range of types of steam and diesel marine engines.

Dennys were always innovators and were one of the first commercial shipyards in the world to have their own experimental testing tank: this is now open to the public as a museum. William Denny & Company went into voluntary liquidation in...
Read More