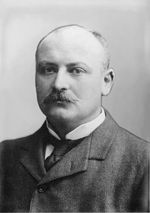 Description:
William Fife III OBE (1857–1944), also known as Wm. Fife, Jr., was the third generation of a family of Scottish yacht designers and builders.Fife was born in the small village of Fairlie on the Firth of Clyde. His father William Fife II (1821–1902) and grandfather William Fife I (1785–1865) had also been designers and boatbuilders in Fairlie. The family business operated from a yard on the beach in the village. Fife began building yachts in 1890 and soon surpassed the achievements of his father and grandfather and became known as one of the premier yacht designers of the day.

As the third generation of a venerable Scottish boat building family, William Fife inherited a rich legacy but was quick to establish his own reputation as one of the top designers in the yachting world. Often dominating his chief competitors, Fife was a master of his trade who received commissions from European royalty and from clients as far away as Australia. Following on the heels of the success of his design Dragon (1888), Fife adopted a stylized Chinese dragon as his trademark. Thereafter, those yachts that took shape on the shingle at Fairlie were known throughout the yachting world by this distinctive scrollwork.