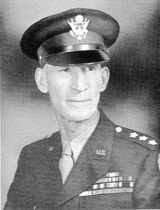 Description:
General William Hood Simpson (May 18, 1888 – August 15, 1980) was a distinguished U.S. Army officer who commanded the U.S. Ninth Army in northern Europe, during World War II, among other roles.

William Simpson was born May 18, 1888, at Weatherford, Texas. After graduating from the United States Military Academy in 1909, he was commissioned into the infantry. Before US involvement in World War I, Simpson served in the US and in the Philippines, including the Mexican Punitive Expedition, in 1916.

He was promoted to Captain in May 1917 and served with the 33rd Division throughout World War I, receiving temporary promotions to Major and Lieutenant Colonel and becoming divisional Chief-of-Staff.

In the inter-war years, 1919–1941, Simpson filled staff appointments and attended military schools, both as student and as instructor. From 1932 to 1936, he served as the Professor of Military Science at Pomona College in Claremont, California. In mid-1940, he was appointed to command the 9th Infantry at Fort Sam Houston, Texas. Before US entry into World War II, he had commanded divisions and received promotion to temporary Major-General, taking 35th Division from Camp Robinson, Arkansas, to a training site in California.

Further promotions followed and in May, 1944, as a Lieutenant General, Simpson took his staff to Britain to organise the US 9th Army. This formation was activated as part of Omar Bradley's 12th Army Group, on September 5 at Brest, France. Brest was liberated on...
Read More