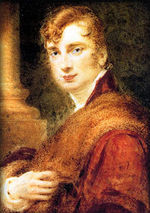 Description:
William John Bankes (11 December 1786 – 15 April 1855), the second, but first surviving son of Henry Bankes, was a notable explorer, Egyptologist and adventurer. He was a member of the Bankes family of Dorset and he had Sir Charles Barry recase Kingston Lacy in stone as it is today. He travelled extensively to the Near East and Egypt and made an extensive individual collection of Egyptian artifacts.Warren R. Dawson and Eric P. Uphill, Who Was Who in Egyptology, 1972, s.v. "Bankes, William John". His work on Egypt although not acknowledged until recently is vastly important. He was good friends with Lord Byron, Samuel Rogers and Sir Charles Barry. He also served as Tory Member of Parliament (MP) for Truro in 1810, for Cambridge University from 1822–26, for Marlborough from 1829 to 1832 and finally for Dorset from 1832-35.

William Bankes became interested with exploration and discovery and had an evident passion for ancient Egypt and fine art. His massive portfolio of notes, manuscripts and drawings produced and collected during his travels along the Nile with explorations in Egypt, Nubia, and the Near East with Giovanni Finati, whose memoirs he translated, Narrative of the life and adventures of Giovanni Finati, native of Ferrara: who, under the assumed name of Mahomet, made the campaigns against the Wahabees, for the Recovery of Mecca and Medina, 1830. have significant...
Read More