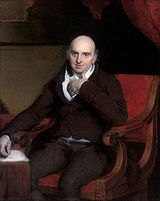 Description:
William Morgan, FRS (26 May 1750&nbsp;– 4 May 1833) was a Welsh physician, physicist and statistician, who is considered the father of modern actuarial science.

He was born in Bridgend, Glamorganshire, son to physician William Morgan and Sarah, née Price. His brother was George Cadogan Morgan. At eighteen he came to London for medical training at Guy's Hospital, working also as an apothecary to pay his way. He did not complete his training, but after one year returned to Bridgend to join his father's practice. He was not popular with his father's patients: they thought him inexperienced and they resented receiving treatment from someone with a deformity—Morgan suffered from a club foot. After his father's death he left medicine and, on the recommendation of his mother's brother, in 1774 was appointed Assistant Actuary of The Equitable Life Assurance Society. The next year, after the death of John Pocock, he was elected Actuary. By the time he retired in 1830, 56 years later at the age of 80, he laid the foundations of the actuarial profession&nbsp;—in fact the term "actuarial" became attached to the profession because of his title.

He won the Copley Medal in 1789 for his two papers on the values of Reversions and Survivorships, printed in the last two volumes of the Philosophical Transactions of the Royal Society, in the field of actuarial science: