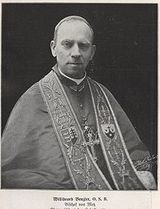 Born as Karl Heinrich Johann Eugen Benzler in Niederhemer, Westphalia, the eldest son of Karl Benzler, an innkeeper, and his wife, Klementine (née Kissing), he was baptized at SS Peter and Paul Church on 24 October 1853. After attending the elementary school in Niederhemer and the höhere Bürgerschule in Menden, he went on to study at the secondary school in Attendorn, and (from 1867–1871) at the gymnasium Paulinium in Münster, where he graduated.

After beginning to study architecture in Cologne, in December 1871 he changed to study philosophy and Catholic theology at the University of Innsbruck. In the autumn of 1872 he joined the Collegium Canisianum maintained by the Jesuit; however, his application to join the order was denied in 1874. Instead he joined the Benedictine abbey of Beuron and chose the name Willibrord. On 28 August 1877 he was ordained to the priesthood by Johann Baudri, auxiliary bishop of Cologne.

During the Kulturkampf the monks of Beuron were forced to leave the country. From 1875 to 1880 they stayed in Volders (Tyrol). In 1880 they were invited to revive the Emaus Abbey in Prague. From 1883 to 1887 he was prior of Seckau Abbey in Styria, which had been revived as a priory of Beuron. In 1887 the monks were able to return to their monastery in Beuron, where he became prior. In 1892 Maria Laach Abbey was refounded by the monks of Beuron,...
Read More