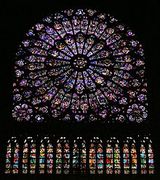 Description:
Windows have been a defining feature of church architecture since the beginning of Christianity.

From the beginning, Christian churches, in contrast to the ancient temples, were intended to be places for the assembling of the faithful. The temperament of the people of the East and of the South where Christian houses of worship first appeared required the admission of much light by large openings in the walls, that is, by windows. The early Christian basilicas were richly provided with large windows, placed partly in the central nave, that was raised for this purpose, partly in the side aisles and façade. In Western Europe, or rather in the countries under Roman influence, the places where the windows existed on the side aisles can no longer be identified with absolute certainty, owing to the chapels and additions that were later frequently built. In the East, however, where it was customary to select isolated sites for church buildings large windows were the rule. The place of the window was determined by the architectural membering of the basilica, the distance between two columns generally indicating the position of a window. However, there were endless exceptions to this rule in the East; thus at Bakusa in Syria the windows are close together as well as over the columns; at Kalat-Seman each intercolumnar space contained two windows. In general, two or three windows united in a group, as was later the rule in Roman architecture, were even then of...
Read More