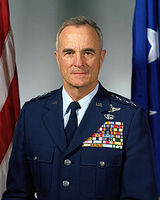 Description:
Lieutenant General Winfield W. Scott, Jr. (born December 10, 1927) was the tenth Superintendent of the United States Air Force Academy in Colorado. Thereafter, he was appointed Superintendent of the New Mexico Military Institute, a public military junior college that is supported by the State of New Mexico, located in Roswell, New Mexico.

Scott was born in 1927, in Honolulu. He graduated from high school in Lewisburg, West Virginia, in 1945 and entered the United States Military Academy at West Point, New York in 1946. Upon graduation from the academy in 1950, he received a bachelor of science degree in military science and a commission as a second lieutenant. General Scott earned a master of arts degree in international law and relations from The Catholic University of America, Washington, D.C., in 1963. He completed the Armed Forces Staff College in Norfolk, Virginia, in 1964 and the Naval War College in Newport, Rhode Island, in 1967.