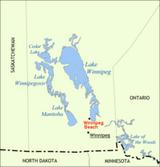 In 1900, the Canadian Pacific Railway (CPR) purchased of undeveloped shoreline 65 kilometres north of Winnipeg on the southwestern shore of Lake Winnipeg and commenced construction of a resort town. In addition to the attraction of a three kilometre stretch of sandy beach, the CPR also built and offered an array of accommodation, recreation, and amusement facilities, including a prominent dance hall.

In the early 1900s, ritzy hotels lined the main street of Winnipeg Beach. Piers, parks and picnic grounds were constructed to accommodate the weekend masses that would travel to Winnipeg Beach from the nearby capital city. By 1913, the summer retreat had become so popular that the CPR had 13 trains running the line between the beach and the City of Winnipeg. The famous Moonlight Special returned to the city at midnight every Saturday for fifty years. The round trip...
Read More