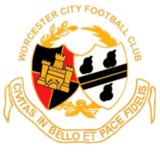 Description:
Worcester City Football Club is an English football club based in Worcester, Worcestershire. The club are currently members of the Conference North and play at St George's Lane.

The club was formed on 9 September 1902 following the liquidation of another local side, Berwick Rangers. They took over Berwick's fixture list in the Birmingham & District League. Three years later they reached the first round of the FA Cup, losing 6–0 at home to Watford. In 1924–25 they won the league for the first time, and the following season reached the FA Cup first round again, losing 2–0 to Kettering Town in a second replay at St Andrew's. The club won back-to-back league titles in 1928–29 and 1929–30, also reaching the FA Cup first round in the former, losing 3–1 at Walsall. In 1938 they joined the Southern League. During World War II the club returned to the Birmingham & District League for two seasons.

After the war Worcester rejoined the Southern League. In 1958–59 the club reached the first round of the FA Cup again. After beating Chelmsford City in a replay, and Millwall 5–2 in the second round, they were drawn against Liverpool. A 2–1 win saw Worcester qualify for the fourth round, where they lost 2–0 at home to Sheffield United, setting their record attendance of 17,042.

In 1973–74 the club were relegated to Division One North of the Southern League. They returned to the Premier Division as Division One champions in 1977, and in 1978–79 won the...
Read More