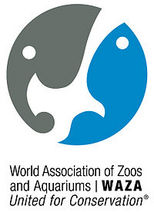 World Association Of Zoos And Aquariums

World Association of Zoos and Aquariums

Description:
The World Association of Zoos and Aquariums (WAZA) is the "umbrella" organisation for the world zoo and aquarium community. Its mission is to provide leadership and support for zoos, aquariums, and partner organizations of the world in animal care and welfare, conservation of biodiversity, environmental education and global sustainability.

After an earlier International Union of Directors of Zoological Gardens (IUDZG), founded in 1935 at Basel, Switzerland, ceased to exist during World War II, a new IUDZG was founded in Rotterdam in 1946 by a group of zoo directors from allied or neutral countries. In 1950 IUDZG became an international organisation member of International Union for the Protection of Nature (IUPN), later International Union for Conservation of Nature (IUCN). The IUDZG adopted a new name, World Zoo Organization, in 1991 and revised its membership rules to include regional zoo associations. In 2000 IUDZG was renamed as WAZA to reflect a more modern institution working together at a global level, to build cooperative approaches to common needs, to tackle common issues, to share information and knowledge, and represent this community in other international bodies such as the World Conservation Union or at Conferences of the Parties to global Conventions, such as CITES (the Convention on International Trade in Endangered...
Read More