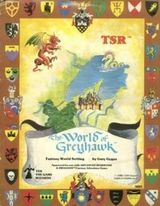 In 1972, after seeing a demonstration of Dave Arneson's Castle Blackmoor game, Gary Gygax agreed with Arneson to co-develop a set of rules for a game that would eventually become known as Dungeons & Dragons. Gygax liked the idea of a castle and dungeon that players could explore, and created his own imaginary place called Castle Greyhawk, which he used to test and develop the game. With almost continuous play during the years 1972–1975, Gygax, and later his co-Dungeon Master (co-DM), Rob Kuntz, expanded the setting to include an entire world. After the creation of TSR, publication of D&D and the release of several adventures set in his world of Greyhawk, Gygax was surprised to learn that there was strong player demand for access to his fantasy setting.Gygax: "When I was asked by TSR to do my World of Greyhawk as a commercial product I was taken aback. I had assumed most DMs would far prefer to use their own world settings." He agreed to publish a campaign......
Read More