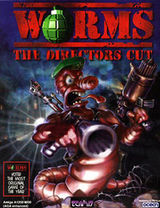 Description:
Worms: The Director's Cut is a sequel to Worms, an artillery game developed by Team17 and published by Ocean Software. It was programmed by Andy Davidson and released in 1997 for the Amiga platform only.

The player has control of a team of worms and takes turns at attacking either computer or human opponents controlling other teams. The game builds upon Worms (1995) and adds various graphical and gameplay developments. The Director's Cut received positive reviews from critics and fans alike, but only sold 5,000 copies worldwide.

The Director's Cut features turn base combat in same style as its predecessor, Worms. The game has a 2D side on view of the battlefield where players fight worms against each other. The game can be played against the computer, or with multiple players taking control of teams of four worms. The worms can use various weapons, some of which are limited in quantity. Each worm has a life meter and the team with the last surviving worm(s) is the winner.

The landscape of the battlefield affects the style of battle that takes place. Similar to Worms, The Director's Cut generates landscapes in a range of styles such as "snow" or "beach". The game also adds a level designer which allows the player to design their own battlefields. There are various settings and options that allow the player to customise how a battle is fought. These include altering the power and availability of...
Read More