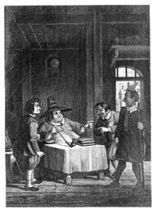 Van Twiller was chosen for the position because he had made two voyages to the colony of New Netherland prior to his appointment. He was a clerk in the warehouse of the Dutch West India company and he was a cousin of Kiliaen van Rensselaer who was married to as sister of Walters father. He was employed by the latter to ship cattle to Rensselaerswyck, his colonial estate on the Hudson River. Van Twiller was somewhat acquainted with the geography of New Netherlands and the condition of its affairs. Largely through Van Rensselaer's influence he was chosen by the Dutch West India company Director-General of New Netherlands, sailing for New Amsterdam in the ship De Soutberg.

Among a considerable amount of land and properties, Van Twiller purchased 'Noten Eylant', later called Governors Island from a tribe of Canarsee Indians for two axe heads, a string of beads and some iron nails. During his time in office, settlers from New England wrested away the Connecticut Valley from New Netherland, but he was able to defend the Dutch territory in the Delaware Valley, where his soldiers captured a shipload of intending settlers from Virginia and expelled soilders who had...
Read More