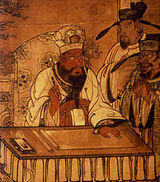 Description:
Yama (Sanskrit: यम) the name of the Buddhist dharmapala and judge of the dead, who presides over the Buddhist Narakas (Pāli: निरय Nirayas), "Hells" or "Purgatories". Although ultimately based on the god Yama of the Hindu Vedas, the Buddhist Yama has developed different myths and different functions from the Hindu deity. He has also spread far more widely, and is known in every country where Buddhism is practiced, including China and Japan.

Yama is the son of Hindu god Sun. He is the presiding deity of Naraka and also known as Dharma. Later adopted in Buddhism,Yama was understood by Buddhists as a god of the dead, supervising the various Buddhist "hells". His exact role is vague in canonical texts, but is clearer in extra-canonical texts and popular beliefs, which are not always consistent with Buddhist philosophy.

In the Pali canon, the Buddha states that a person who has ill-treated their parents, ascetics, holy persons and elders is taken upon his death to Yama.See, for example, MN 130 (Nanamoli & Bodhi, 2001, pp. 1029-36) and AN 3.35 (Nyanaponika & Bodhi, 1999, pp. 51-3), both of which are entitled, "Devaduta Sutta" (The Divine Messengers). Yama then asks the ignoble person if he ever considered his own ill conduct in light of birth, aging, sickness, worldly retribution and death. In response to Yama's questions, such an ignoble person repeatedly answers...
Read More