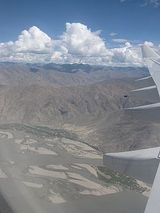 Description:
The Yarlung Zangbo Grand Canyon () or simply the Tsangpo Canyon or Tsangpo Gorge, along the Yarlung Tsangpo River in Tibet, China, is regarded by some as the deepest canyon in the world, and is slightly longer than the Grand Canyon, making it one of the world's largest. The Yarlung Tsangpo River, usually just called "Zangbo" (also spelled "Tsangpo", meaning "purifier"), originates from Mount Kailash and running east for about 1700&nbsp;km drains a northern section of the Himalayas before its enters the gorge near Pe, Tibet. The canyon has a length of about 150 miles as the gorge bends around Mount Namcha Barwa (7756 m) and cuts its way through the eastern Himalayan range. Its waters drop from 3,000 m near Pe to about 300 m at the end of the gorge. After this passage the river enters Arunachal Pradesh, India, and eventually becomes the Brahmaputra.Zheng Du, Zhang Qingsong, Wu Shaohong: Mountain Geoecology and Sustainable Development of the Tibetan Plateau (Kluwer 2000), ISBN 0-7923-6688-3, p. 312;

As the canyon passes between the peaks of the Namcha Barwa (Namjabarwa) and Gyala Peri mountains, it reaches a depth of about 15,000 feet. This is one of the deepest canyons on Earth. This part of the canyon is at . Namcha Barwa, 25,446 feet high, is at , and Gyala Peri, at 23,462 feet, is at .<ref...
Read More