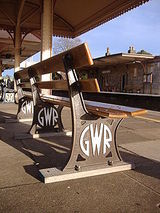 Description:
Yatton railway station serves the village of Yatton in North Somerset, England. It is west of Bristol Temple Meads railway station on the Bristol to Taunton Line.

The station was opened by the Bristol and Exeter Railway on 14 June 1841 as 'Clevedon Road'. The station was designed by Isambard Kingdom Brunel with the main station building on the platform for eastbound trains towards Bristol, and a smaller building on the westbound platform. A hotel was provided adjacent to the eastbound platform for people travelling to Clevedon.

The Clevedon branch line opened 28 July 1847 when the name of the station was changed to 'Yatton'. A small bay platform was provided at the west end of the eastbound platform for the branch trains and an unusual train shed with louvre ventilation was provided for shelter. This was replaced in 1956 by a second-hand canopy brought from Dauntsey railway station. This still stands, but a matching one on the westbound platform has since been removed.

Yatton became even more important on 3 August 1869 when the Cheddar Valley Railway was opened, which became famous for the transport of strawberries from stations such as Axbridge and Cheddar. The line was extended to Wells on 5 April 1870. This joined there with the East Somerset Railway line from Witham (constructed between 1859 and 1862), and through services from Yatton to Witham became normal for this line.

Another bay platform was provided for the Cheddar Valley...
Read More