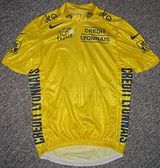 Description:
Since the first Tour de France in 1903, there have been 1,994 stages, up to and including the 21st stage of the 2011 Tour de France. Since 1919, the race leader following each stage has been awarded the yellow jersey ().

Key:<br />In previous tours, sometimes a stage was broken in two (or three). On such occasions, only the cyclist leading at the end of the day is counted. The "Jerseys" column lists the number of days that the cyclist wore the yellow jersey; the "Tour wins" column gives...
Read More