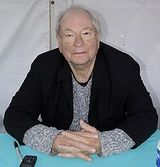 Yoram Kaniuk was born in Tel Aviv. His father, Moshe Kaniuk, born in Ternopil, Galicia , was the first curator of Tel Aviv Museum of Art. His grandfather was a Hebrew teacher who wrote his own textbooks. Kaniuk's mother, born in Odessa, was also a teacher. Her family immigrated to Palestine in 1909, the year Tel Aviv was founded, and settled in Neve Tzedek.

At the age of 17, Kaniuk joined the Palmach. In 1948, during the War of Independence, he was shot in the legs by an Englishman in a kaffiyeh. He was treated at Mount Sinai Hospital in New York.

Kaniuk has petitioned the Israeli Interior Ministry to change his status from "Jewish" to "no religion."

Kaniuk has published 17 novels, a memoir, seven collections of short stories, two books of essays and five books for children and youth. His books have been published in 25 languages and he has won numerous literary prizes. An international conference dedicated to the works of Kaniuk was held at Cambridge University in March 2006....
Read More