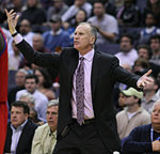 Description:
The 1973 NBA Draft was the 27th annual draft of the National Basketball Association (NBA). The draft was held on April 24, 1973 before the 1973–74 season. In this draft, 17 NBA teams took turns selecting amateur U.S. college basketball players and other eligible players, including international players. The first two picks in the draft belonged to the teams that finished last in each conference, with the order determined by a coin flip. The Philadelphia 76ers won the coin flip and were awarded the first overall pick, while the Portland Trail Blazers were awarded the second pick. The remaining first-round picks and the subsequent rounds were assigned to teams in reverse order of their win–loss record in the previous season. Prior to the draft, the Baltimore Bullets relocated to Landover, Maryland and became the Capital Bullets. The Philadelphia 76ers were awarded an extra first-round draft pick as compensation when the Seattle SuperSonics signed John Brisker. A player who had finished his four-year college eligibility was eligible for selection. If a player left college early, he would not be eligible for selection until his college class graduated. Before the draft, 11 college underclassmen were declared eligible for selection under the "hardship" rule. These players had applied and gave evidence of financial hardship to the league, which granted...
Read More