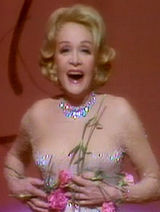 An Evening With Marlene Dietrich

An Evening With Marlene Dietrich

Alexander H. Cohen, who had produced Dietrich's successful Broadway runs of her one-woman show in 1967 and 1968, suggested a television version of her show.

Dietrich would receive a fee of $250,000 for her participation in the project. It was said at the time that this was the highest one-shot fee ever paid to a performer to appear on television. After two airings (one in the UK and one in the US), the copyright on the show would revert to Dietrich.

Dietrich—wary of television as a medium—insisted that the show be filmed in a legitimate theatre in Europe, to best capture her act and audience reaction thereto. The New London Theatre in London was chosen as location for filming, although the theatre would still be under construction at the time of filming. (The theatre would only officially open the following year.)

Lighting designer Joe Davis was brought in to recreate Dietrich's stage lighting and designer Rouben Ter-Arutunian designed a set featuring scrims and incorporating a Dietrich sketch by René Bouche. Dietrich's costumes were by Jean Louis, and Stan Freeman conducted the orchestra, using orchestrations of the Dietrich repertoire by Burt Bacharach.