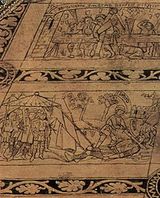 Description:
The Annunciation is an oil painting by the Early Netherlandish master Jan van Eyck, from around 1434-1436. It is in the National Gallery of Art, in Washington D.C. It was originally on panel but has been transferred to canvas. It is thought that it was the left (inner) wing of a triptych; there has been no sighting of the other wings since before 1817. It is a highly complex work, whose iconography is still debated by art historians.

The picture depicts the Annunciation by the Archangel Gabriel to the Virgin Mary that she will bear the son of God (Luke 1:26-38). The inscription shows his words: "AVE GRÃ. PLENA" or "Hail, full of grace...".Contracted from 28 "et ingressus angelus ad eam dixit ave gratia plena Dominus tecum benedicta tu in mulieribus ..." - ; 28"And the angel came in unto her, and said, Hail, thou that art highly favoured, the Lord is with thee: blessed art thou among women." Authorised Version. She modestly draws back and responds, "ECCE ANCILLA DÑI." or "Behold the handmaiden of the Lord".Contracted from 38"dixit autem Maria ecce ancilla Domini fiat mihi secundum verbum tuum et discessit ab illa angelus" Latin Vulgate; 38"And Mary said, Behold the handmaid of the Lord; be it unto me according to thy word. And the angel departed from her." King James/Authorised Version. Her words are painted upside down for God above to...
Read More