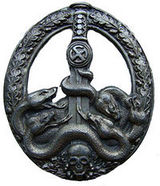 Description:
The Anti-Partisan Guerrilla Warfare Badge (German Bandenkampfabzeichen) was an award of the German military of the Third Reich. Personnel of the Heer, Luftwaffe, and Waffen-SS were eligible to receive it. In German, it was called the "Bandenkampf-Abzeichen", as Reichsfuhrer-SS Heinrich Himmler decided to use the term Banden instead of partisans, not wishing to give credence to the guerrillas.

Partisans or guerrilla fighters were active in almost every country Germany invaded during the Second World War, and while many of these movements were initially small and disorganized, in many cases, they coalesced into larger, more powerful bands of fighters. In some countries, notably Russia and the Yugoslavian states, the partisans became large and dangerous movements, requiring increasing German manpower and resources to resist them. The anti-partisan guerrilla warfare badge was created in recognition of the Axis soldiers involved in these behind-the-lines battles.

The badge existed in three grades, bronze, for 20 combat days, silver, for 50 combat days, and gold, for 100 combat days against partisans. Criteria were slightly different for the Luftwaffe, being based on sorties instead of days in action.

Hitler was known to say that the Close Combat Clasp was...
Read More