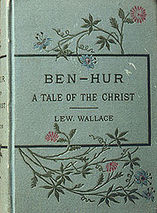 Ben-Hur: A Tale Of The Christ

Ben-Hur: A Tale of the Christ

Description:
Ben-Hur: A Tale of the Christ is a novel by Lew Wallace published on November 12, 1880 by Harper & Brothers.

The novel was a phenomenal best-seller, surpassing Harriet Beecher Stowe's Uncle Tom's Cabin (1852) as the best-selling American novel and retained this distinction until the 1936 publication of Margaret Mitchell's Gone with the Wind. Book sales then surpassed Gone with the Wind, following the release of the highly successful 1959 MGM film adaptation; the film winning eleven Academy Awards.Wallace, Lew (1998) Ben-Hur. Oxford World's Classics (Introduction) Page vii The book was the first work of fiction to be blessed by a Pope, receiving benediction from Pope Leo XIII.Asimov, Isaac Isaac Asimov's Book of Facts (1981) Random House Value Publishing

The story tells of the adventures of Judah Ben-Hur, Jewish prince and merchant in Jerusalem at the beginning of the 1st century. Ben-Hur's childhood friend Messala arrives back home as an ambitious commanding officer of the Roman legions. They come to realize how much they have changed and now hold very different views and aspirations. During a military parade a brick falls from the roof of Judah's house and barely misses the Roman governor. Although Messala knows that they are not guilty, he condemns the Ben-Hur family. Without trial, Judah is sent to work until death as a Roman galley slave, his mother and sister are thrown into prison and...
Read More