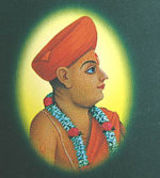 Description:
Brahmananad Swami (Devnagari: ब्रह्मान्द स्वामी) (1772-1832) was a saint of the Swaminarayan Sampraday and one of Swaminarayan's Paramahamsas.

Brahmanand Swami was born Ladudan to Gadhavi Shambhudanji Barot and Laluba Charan in Khan village, at the foot of Mount Abu, in Dungarpur district of Rajasthan in 1772.

At a young age In the royal court he sang poems in Gujarati. The Rana of Udaipur, impressed with him, directed to be taught Pingal (science of constructing poetry) to the child at the cost of the state, hence Ladudan was well educated and later became a part of King of Udaipurs court. Ladudan learnt pingal and Sanskrit scriptures from Ladhaji Rajput of Dhamadka, becoming a scholar in Pingal, poetry and scriptures. Ladudan earned fame and wealth by visitng stately courts of Jaipur, Jodhpur among others, which were impressed by his poetry.

Ladudan was in Bhuj where he had heard about Swaminarayan and went to meet him. Swaminarayan was addressing a gathering in Bhuj. Ladunan was attracted to him. Swaminarayan returned to Gadhada with poet Ladudan. Ladudan lived a majestic and royal life befitting a courtier. He was always clad in most precious attires and was adorning jewellery befitting royalty. Swaminarayan did not like such luxurious life...
Read More