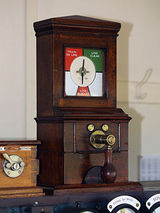 Description:
The principle of the British absolute block system of railway signalling is to ensure the safe operation of a railway by allowing only one train to occupy a defined section of track at a time. This system is used on double or multiple lines where use of each line is assigned a direction of travel.

Prior to the introduction of block systems, time-intervals were used to ensure that trains were spaced sufficiently apart; typically if five minutes had passed since the first train had departed then a second train was allowed to the proceed; although the driver was warned that there was a train only five minutes ahead.Derail: Why Trains Crash by Nicholas Faith, chapter 4, publ 2000 by Channel 4 books, ISBN 0-7522-7165-2

The electric telegraph provided the ability for signalmen to communicate with each other and provided the basis for the absolute block system. It successfully managed train control over most of the British railway system until generally superseded by more sophisticated systems from 1950. Absolute block signalling however still constrains capacity on many lines, major and minor (see Network Rail RUS).

Object of the system

The object, or aim, or the absolute block system is in itself defined fairly simply - "to...
Read More